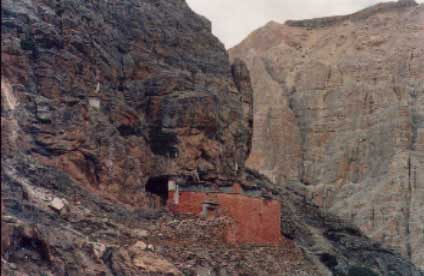 In the 12th century, Drupthop Senge Yeshi, a great Tibetan saint, recognized "The Crystal Mountain of Dolpo" as the residence of the highest tantric deity, Chakrasamvara (Dechog in Tibetan). He consecrated this holy place and went on retreat for nine years, practicing meditation in "Dorjee Cave", which is located beside the present monastery. Senge Yeshi then established a monastery, naming it "Gomoche", which means "the big gate". It is believed the monastery was built at the gate of the Crystal Mountain of Chakrasamvara. Since then, the monastery has become an important place for pilgrimages. Hundreds of visitors and pilgrims come every year to pray and make requests. 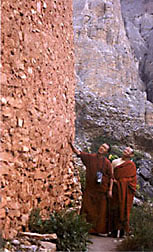 Gomoche Monastery was an old building which was about to collapse. No monks had lived in it for a long time. It posed a great risk to pilgrims and visitors who came from all over the world to see inside the monastery and perform ritual ceremonies, not to mention the clergy of the Gonpa. Also endangered were the precious articles and sacred objects, including the the holy stupa of Druptop Senge Yeshi (which legend says was built by gods), which have been collected by the Gonpa over hundreds of years. 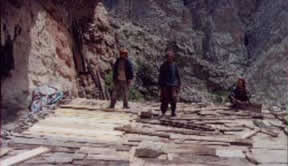 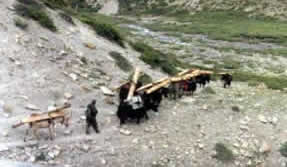 Senge Tenzin Rinpoche and the Lamas at Gomoche monastery would like to take this opportunity to express their heartfelt thanks to all those people who have made donations which have enabled the initial construction work of the monastery to be carried out. 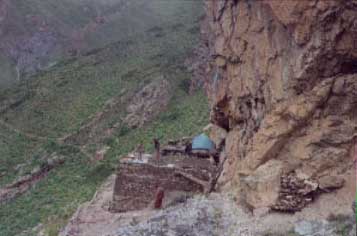 Senge Rinpoche and the Lamas at Gomoche Gonpa now request your further generosity to enable them to complete the external building and the interior artworks of Gomoche monastery for the benefit of the regional people, monks, pilgrims, visitors and for coming generations.